What got confirmed in this week’s cycling

Home/confirmed, cycling/What got confirmed in this week’s cycling
Previous Next

What got confirmed in this week’s cycling 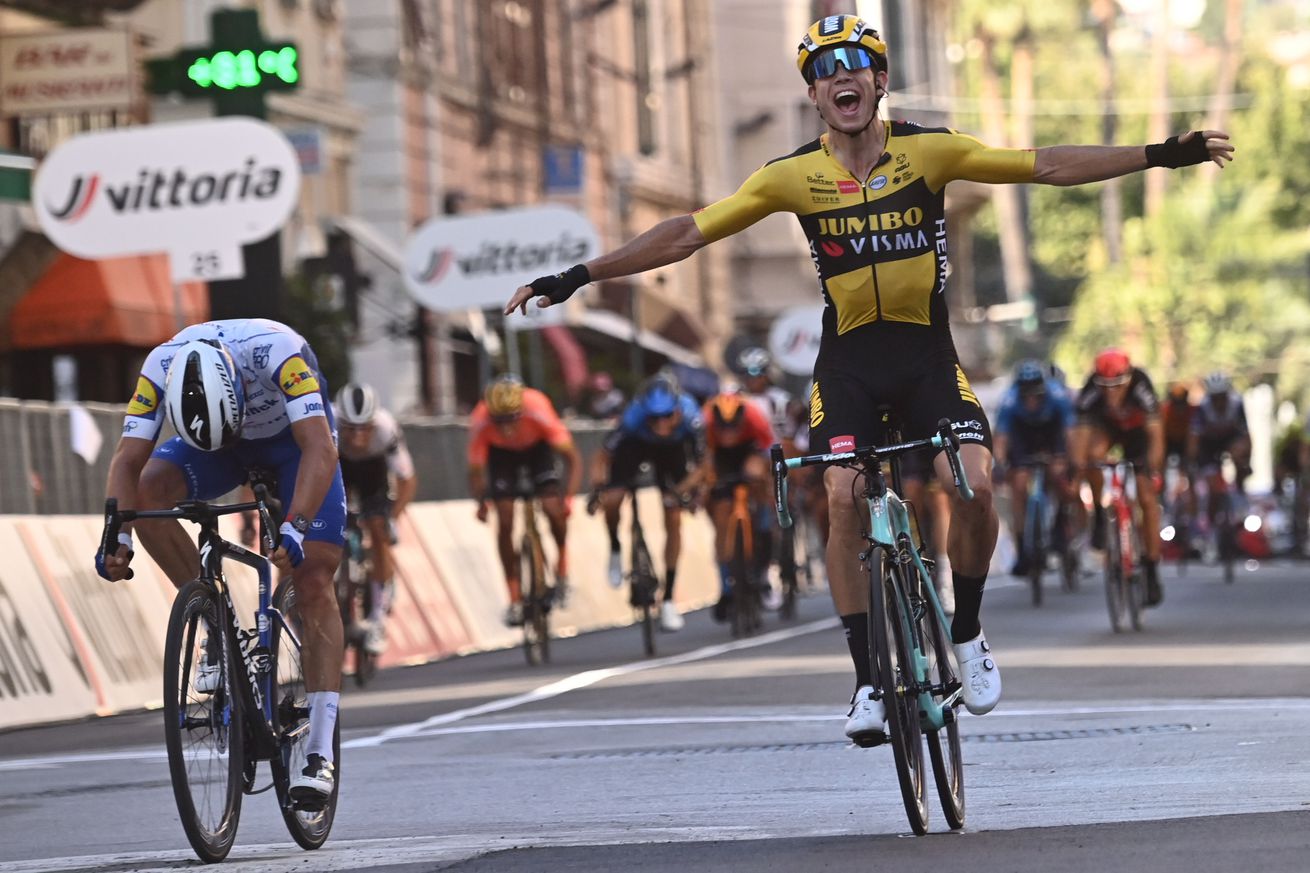 We’re back, and we’ve learned… nothing?

You know how much I like a “what we’ve learned” column, and this feels like a good day to sit down and take stock, with two major Italian classics and two big stage races wrapped up, plus a few lesser races. My big takeaway this week is that we haven’t really learned anything. So, instead of things we’ve learned, here is a review of a few things that we already knew that have been comprehensively confirmed. To wit:

Remco Evenpoel is beyond meaningful comparison

His season last year (winning San Seb, Tour of Belgium and taking 2nd in the TT worlds) was extraordinary and showed that his U-18 promise was going to come through in the pros, earlier than many of us thought. I just didn’t think he could be this good this fast, but I’m officially done with making predictions on this kid’s ceiling. Not only is he a fantastically aggressive rider and clearly the most talented Belgian cyclist in decades, but his particular skills (climbing and time trialling) just happen to be the two critical elements of stage-racing success.

Does he win the Giro? I don’t know. If he does, he’d be the youngest winner since Fausto Coppi in 1940, who (I think – but check my maths) was a month or so younger. He’d be winning in his first grand tour. He’d be doing it against deeper fields than Coppi had to face, with the world’s best coming to Italy. It seems hugely unlikely. But so does everything else he’s done to date. Logic goes out of the window with him. When the Tour of Poland is the lead story ahead of Milan – San Remo, you know you’re onto something special. Look out for him in Il Lombardia, the Giro, and every other race he suits up for.

He was probably in the elite class already, but having started his career in cross, he didn’t have an elite-level list of wins on the road for a 25 year old. There’s nothing wrong with a Tour stage, a Belgian TT championship and the Tour of Denmark, but for a rider of his undoubted class… meh.

That was last Saturday, and this is now. He’s a monument winner, and he’s thrown in Strade Bianche for good measure. He’s on good form and has a well-rounded set of skills for a classics rider – great bike handler, good on sharp climbs, and has a finish. He’s needed all of those to pick up a storied double in Italy, and they’ll stand him in good stead for the rest of this year (with all the Belgian races still to come, confusingly) and for years beyond.

There was a lot of discussion before Milan – San Remo about the new course and the current trends in cycling, and whether we are watching a move towards the puncheurs taking the sprinters out of the race. We got what most of us expected – the new course played out almostly exactly like the old course, with a scintillating finish on the Via Roma – and we saw another year in which the sprinters couldn’t get back to the puncheurs after the Poggio.

Why? Well, I don’t think there’s a fundamental change in the balance of the race. I think that Julian Alaphilippe is really, really quick on a hill. If you look at the chase coming onto the flat kilometres, it is a strung out group of isolated team leaders – gone for now are the days of a bunch with committed super-doms still pushing their sprinters back to the front. The time gap from the top of the hill isn’t the only factor in giving the chase a change, it is all about how spent the chase group are.

Ala has taken to the startline in Milan four times. He won last year and was second this, as well as third in 2017. More than that, in those three editions he was the chief animator and the only reason that I won’t be recommending sprinters for the win again until he stops doing his thing. Something else I should have known before this weekend’s racing.

Jumbo are a real challenge to Ineos’ mountain dominance

Jumbo are killing cycling? Well, let’s not leap to conclusions. The Tour de l’Ain was only a three day race, but it was a tough one and both Jumbo and Ineos brought stacked teams. Primoz Roglic looked a hair better than Egan Bernal in the climbs, but the gap between his support team (Dumoulin, back riding after over a year and looking impressive, as well as Kruijswijk and Bennett) and the Ineos train (Froome, Thomas, Amador and Castroviejo) was vast. In fact, Castro was the pick of the Ineos support, with Froome understandably below-par and Thomas surprisingly so. From here, it looks a difficult journey to Tour selection for Froome, whilst Thomas will need to show more in the Dauphine.

I talked about the likely advantage for the fast-starters and picked Roglic as a winner and Thomas/Froome as losers, so I’m not shocked by this. However, the extent of the gap was intriguing to say the least. Is there time for equity to be restored? Yes, and the list of climbers that Ineos didn’t bring to this race is deeper and more talented. However, if he’s to add a second Tour win, Bernal shouldn’t expect the armchair ride that Froome and Wiggins enjoyed at the peak of Sky’s dominance.

It counts as good news that Fabio Jakobsen is “only” dealing with severe facial injuries and a very long recovery period. Having seen the crash and heard the initial prognosis, there were justifiable fears that it could have been far worse. Needless to say, we wish him well for a full and speedy recovery.

Let’s hope that the events were serious enough for meaningful action to be taken across the sport. I’m no legal philosopher, but I am a little queasy about the link between outcome and punishment (though I recognise this happens all the time, as with the distinction between vehicular manslaughter and dangerous driving, where the actions are the same and the consequences vary). Those pushing for severe punishments for Dylan Groenewegen have my full support. I don’t think that his punishment should be worse because Jakobsen was severely hurt, or reduced because he looks (touch wood) like he’ll make a full recovery.

His swerve towards the barrier was reckless, intentional, and severe. That is why he deserves a major punishment. Jens had this right in the comments on the live thread – this will keep happening unless and until any rider deviating significantly from their line is punished, even if nobody is hurt. There are others who need to look in the mirror, of course – as cycling becomes a more popular sport around the world, barrier design needs a complete rethink, as the domino effect was made far worse by the rebounding advertising and barrier. Equally, whichever stage designer thought that a downhill finish with a narrowing road would be a good idea probably shouldn’t be designing any more stages.

The good news, of course, is that the medical processes worked. An air ambulance evacuation was completed speedily after excellent on-the-ground care. We sometimes knock the UCI for their desire to push global cycling but the infrastructure around a race well away from their usual roads was good enough to cope with an awful crash. It is also a huge relief that the race official got away with being stuck in the wrong place at the wrong time.

This new calendar is going to be hectic

This was something we all knew, but Saturday was the best example yet of the impact of a truncated calendar. Not only are there more overlapping races, but with so many riders scrambling for race practice, the teams are stacked. Last year, if MSR wasn’t your jam, your best alternative was the Volta ao Alentejo, with an 8.4km TT won by Joao Rodrigues. This year, you could watch Roglic vs Bernal as an appetiser, the MSR finale as a main course, and Remco’s rampage in Poland to finish with something very sweet.

Today and tomorrow we can draw breath. Then comes the Dauphine, with the best field I’ve ever seen assembled (no clash with Switzerland, you see) as well as the next two Italian one-dayers, with the second monument of the year on tap for Saturday. That’s to say nothing of Hageland or the start of the Waloon tour, all of which will be underway before this time next week. This is a mad year and it is basically all dreadful, but August’s cycling is a tiny bit of silver lining in the big grey clouds.