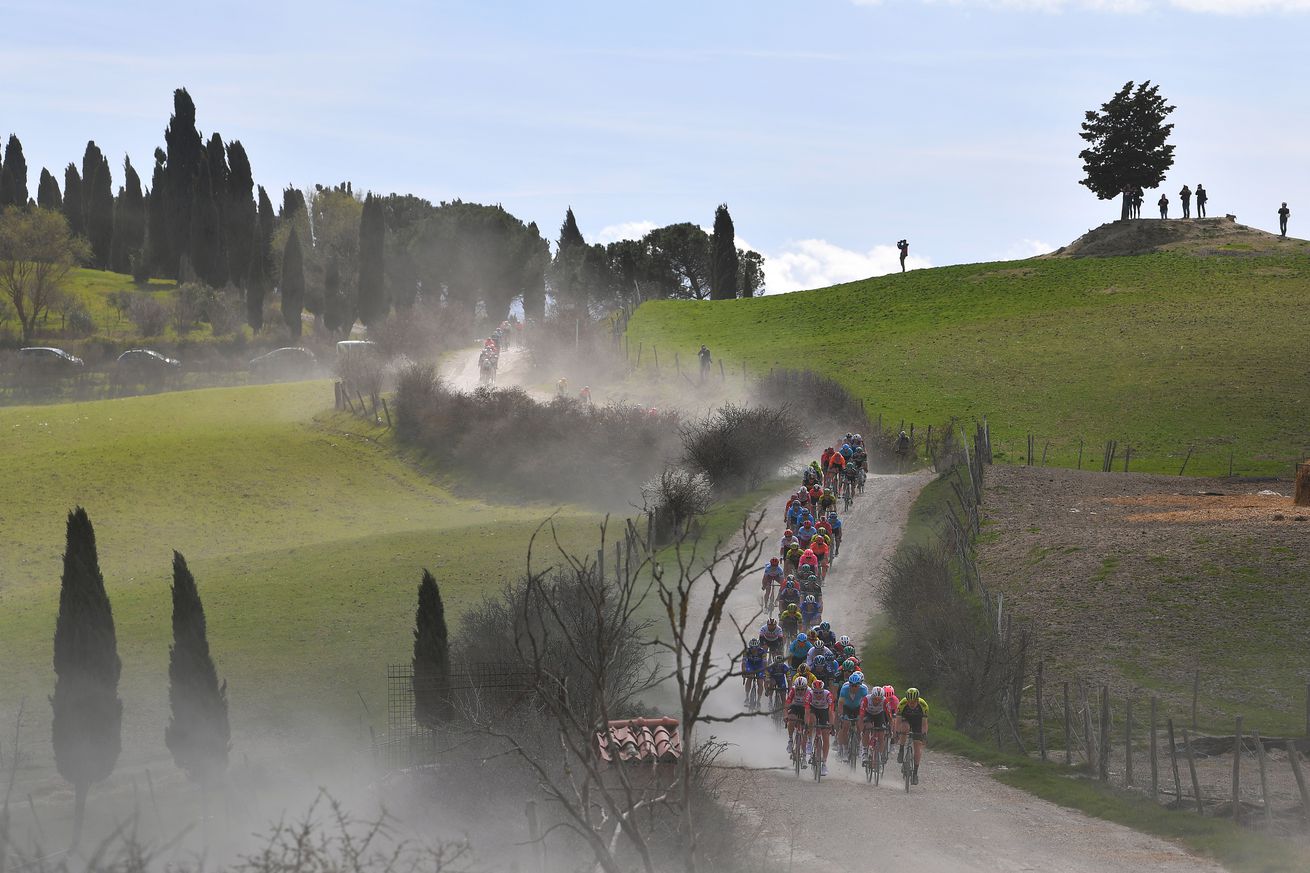 World Tour racing is back, with a beauty

World Tour racing returns on Saturday, with a race that we here at the Café love more than is sensible. In fact, we talked seriously about whether it should be a monument. Certainly it is a beautiful, tough, and exciting course. There’s opportunities for all sorts of riders to win, as the lists of victors demonstrate.

It is also a race with a nice spot in the calendar, just before the start of Tirenno-Adriatico and whilst the riders are getting fully tuned up for the northern classics proper. This year, of course, that’s all out of the window. Which means more uncertainty, and makes this preview all the harder.

Racing starts on Saturday (1st August) at 1155 (I think, but I’m trusting my Italian here, which is not so much rusty as “barely literate in French and Latin, faking it madly and hoping Civetta doesn’t read this”) and 1345 local for the men, with the women’s race exciting from 1400ish until 1600ish, and the men’s from about 1630 to about 1830. So that’s a nice afternoon in Europe, or a hideously early morning on the West Coast, but then, Chris, Eric et al are used to that. I hope it makes Ursula miserable.

Another big change as a result of the calendar is the weather. If you’re hoping for another day of Benoot and the other marble statues… sorry. It is dry in Tuscany and Saturday is due to be a scorcher, with very little wind. In fact, with some in the peloton presumably struggling for fitness, the heat may play a factor and weaken the resolve of some contenders.

Jens will be back with more details on the day of the race but I’m sure there’ll be some decent feeds. It looks like Eurosport are covering the pointy end of the men’s race but not the women’s, boo hiss. Startlists (girls’ and guys’), guides (girls’ and guys’), etc are all in the usual place. Also, for those of you who are new to these parts, a reminder of the handy tool to work out who is riding for your VDS team (or for your enemy’s team, should you have one). Cycling Seal has a better team in Siena than I do, I’m very sorry to say.

As to the courses, there isn’t much to say, as we know what we’re getting by this point. Tough, undulating rolls and sharp bends, lots of chances to attack, and a mix of conventional roads and the “white paths” that give the race both a name and a unique aesthetic. There are plenty of prolonged periods on the gravel, with both men and women taking the tough and mostly uphill sector of 9.5km through San Martino in Grania and the potentially critical sharp gravel climb at Colle Pinzuto (2.5km on strade bianche, with gradients hitting 15% in places) before the famous savage (but short) climb to the old centre of Siena. Those are the three most obvious places to make selections, but this is a race that can be won at any point. For the teams and riders, constant vigilance (and luck with mechanicals, etc) is key. For viewers, this is a race that will test early season bladder control to the utmost.

Let’s not try for suspense here. Annemiek van Vleuten wins. She won this last year. She’s raced four times this season and won each of her races. The course suits. I’d love to make this more interesting but it would be a shock if she didn’t make it five wins from five days’ racing.

In opposition, we have Annemiek’s old rival Anna van der Breggen, who won in 2018 and was back in ninth last year. She’ll have a chance if she’s on form. Last year’s podium featured Annika Langvad, of mountain biking fame, who I believe won’t be returning this year, and Kasia Nieuwiadoma. I’m sort of assuming she’ll be here but there’s no team news from Canyon yet. I also can’t shake the feeling that this finish will be too tough for her to really compete.

Where else can we look? Ashleigh Moolman-Pasio is on decent form (insofar as one can tell) this year and features for the CCC team. I’d also draw your attention to CCC’s new signing Sofia Bertizzolo, freed of Bastianelli-aiding duties and riding for herself. I suspect I overrate her, but this race looks suited to her skills.

I don’t know if Cecile Uttrup Ludwig rides but if she does, I’d be confident of a good ride, though again, she may lack the explosive climbing to stay with the very best on this course. One who can certainly climb is Eider Merino, who (to my surprise) makes her race debut on Saturday and leads a Movistar team who are strong on climbing but perhaps lack the necessary grit.

So, van Vleuten to win, with van der Breggen in second, and Moolman-Pasio in third. Not a particularly exciting podium prediction, but that’s the way I see this panning out.

This is, I think, harder, if only because there isn’t a single dominant rider so far this season. Let’s start with last year’s winner, Julian Alaphilippe. As is always the case, he may or may not be the best bet on his own team, with 2015 winner Zdenyk Stybar (who’d be happier if it were wetter, one imagines) and Kasper Asgreen also worthy of attention. Still, Ala is well-suited to this tough all-rounders’ course and if he is in the final group he’ll be very hard to beat. Fitness is a question with every rider, but he’s started his season well enough in the past and there’s no reason to think he won’t be ready.

Bora come two-headed with Peter Sagan and Max Schachmann giving two very different riders, who could both threaten. Sagz, of course, has never won this race but has two podiums and two more top tens. One man who has won this is Michal Kwiatkowski, who bested Sagan in 2014 and left van Avermaet in his dust in 2017. His form from last year is a considerable worry but I’m on record as thinking he’ll be back to something like his best this year. If he is, he’ll contend.

Philippe Gilbert hasn’t turned up here often, but won the old Eroica back in 2011. He’s worth keeping an eye on in his new Lotto colours on a parcours that suits him as well as anyone, though it might be too much to expect a win at 38. At the other end of the age scale we have the cyclocross duo, Mathieu van der Poel and Wout van Aert. The former hasn’t raced this course before but will go well if he can stay in touch on the steepest hills, whilst the latter already has two podiums to boast of and must be on the shortlist of potential winners. Also representing the wonderkinder is Tadej Pogacar, who showed form and fitness in competing with Roglic in their national champ races and is certainly climber enough to compete.

There are so many more who I should be writing about (Nibali and Ciccone, Benoot, Bettiol, Naesen, van Avermaet… all worthy of analysis) but we’re closing in on 1,200 words already and I haven’t mentioned the guy who I think will win. Astana come into this race with a very strong team, with former top-10 rider here Fabio Felline joining Ion Izagirre and Davide Martinelli in supporting Jakob Fuglsang and Alexy Lutstenko. Fuglsang was second last year, juuuust unable to keep up with Ala on the final climb, and he’s come back this season to dominate Andalucia before the lockdown. He’s proved to be a world-class rider and should be feared.

I think, however, that his teammate is the man to beat on Saturday. If it feels like he’s been around forever, you should remind yourself that he’s only 27. His early season form this year was good (as it is most years) and he was climbing with the best on the roads in the UAE. His 7th in 2019 was his best result in Strade Bianche but he certainly has the class to improve on that. I’m banking on him continuing to improve, with the advantages of a strong team and a high level of natural fitness. This would probably be the biggest win of his career, but I think he’s due. He’s also available at 20/1, if that’s your poison.

So, this really is throwing darts, but my podium prediction is Lutsenko to beat Kwiatkowski and Fuglsang.