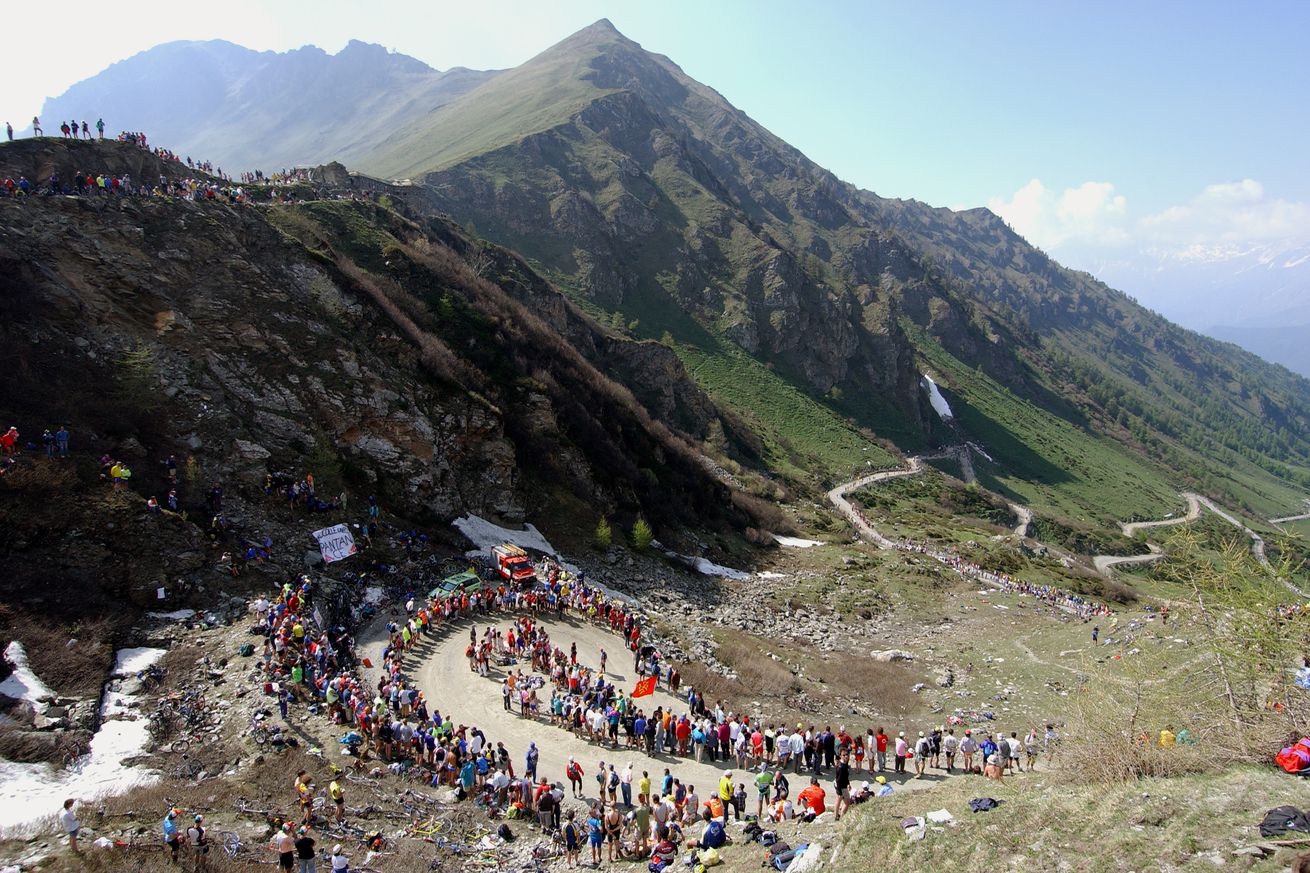 Come journey back to the 2005 Colle delle Finestre stage, the Giro at its most exciting

You too? Well, then I have some good news for you! Our old friend Gavia and I are hosting a Watch Party this Sunday, starting at 8am Pacific (our party, our sleep schedule!). And for the party, we present to you… the 2005 Giro d’Italia stage from Savigliano to Sestriere.

You may already know what happened — and if you do, all I can say is that this video will be just as exciting as if you didn’t. But for those who don’t know or fully remember, I won’t go into the end result beyond saying it was an absolute barn-burner. [Which is a very weird phrase, but there you go.] But I will set the stage some.

First… what’s a Watch Party? Who is Gavia? Regarding the latter, I’m going to pretend you didn’t ask. If you weren’t around the Cafe during her years as editor, I recommend finding her on Twitter to brighten your day. As for the former, a Watch Party is when we all log to twitter and/or here (I’ll be here) and chat together while we watch an old video at the same time. It’s a lot like watching a stage as we normally would, apart from the race having already happened. And as hinted above, if you pick an exciting enough stage, even knowing the ending doesn’t diminish the experience much if at all. We did this through the classics, mostly on Twitter under the #ClassicClassics tag. Now we are adding #ClassicGiro to the realm.

As to the stage, it was the crowning event of a fairly mellow Giro d’Italia, one that featured two meaty time trials of 45 and 34km, possibly tilting the race to Ivan Basso, then Italy’s lone Tour hopeful. But Basso’s coronation went completely haywire during this odyssey of a Giro, where he went into pink on the first mountain stage, then lost it two stages later on a six-climb Dolomite march when he developed stomach problems, supposedly from “drinking too much ice water” after a hot day. OK… Then he lost a full 18 minutes on the Stelvio, left for dead by his team. Then he bounced back and eventually won two stages, but mostly because nobody cared what he was up to anymore.

That left the Fight for Pink to a handful of former winners in Paolo Savoldelli, Gilberto Simoni and Damiano Cunego. Also the emerging classics star Danilo Di Luca was hanging around the classification as well, given the race’s not terribly punishing nature. By the Sestriere stage, Savoldelli was in pink by two minutes over Simoni and three-plus over the rest of the field, including Di Luca, Jose Manuel Garate, Jose Rujano and others.

The Falcon had taken the lead on the strength of the two time trials, which first put him in position to inherit the jersey from Basso, and then to double his one-minute lead over Simoni on the day before the Sestriere stage. But as much as the course favored him, it also set up the Falcon to face his toughest climbing test one day after burning all those matches. And while Savoldelli could climb, Simoni was by far the superior scalatore. Nothing was decided yet.

Here’s the route. It’s 1.5 circuits after a run along the valley from outside Torino. The course was meant to highlight the fact that the Winter Olympics were coming to the city nine months later and a lot of people would be driving up the parallel highway for the ski events. The two summits of Sestriere are no accident, and no laughing matter either. It’s a decent climb. But those two were sandwiched around the Colle delle Finestre, the real meat in the sandwich, making its Giro debut.

Like I said, the main event is the Finestre, lovingly studied in this comprehensive post by the good people at Climbbybike.com. The Finestre is not the worst climb in Italy, but it’s up there at 18 km of steady 9-10% grinding, and the gravel roads at the top made it extra enticing.

Below is the video we will use. It appears to be close to three full hours but the race ends at about the 2:10 mark and it’s just another 45 minutes of classic RAI Processo della Tappa babbling from there (which I 100% recommend watching, obviously). This is not only a classic day but classic Italian TV coverage as well. Enjoy!